Throwing in the Towel 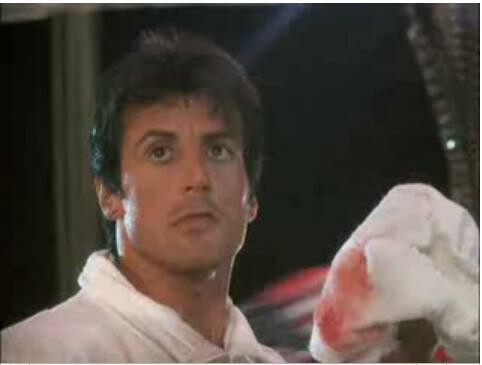 If you've ever seen the movie, Rocky IV, you know that in it there is a scene where Rocky hesitates to throw in the towel during a fight in which his friend, Apollo Creed, dies at the gloves of Ivan Drago. Creed is getting annihilated by Drago and Rocky wants to throw in the towel, but Creed tells him not to. Once Rocky finally decides it's time to 'Call off the fight," Creed is falling to the ground and dies right there in the ring. Throwing in the towel is something that happens in matches when one opponent can't continue fighting. Throwing in the towel means "I give up. You win."

Do you ever want to throw in the towel? Do you ever just throw up your hands and say, "That's it. I'm done." Do you ever just have enough of school, work, family arguments, church fights, and just the day to day grind of life? Do you look around you and see good things drowned out by the wickedness of the world? Do you try everyday to live a good life, one filled with faith toward God and fervent love toward your neighbor? Do you try to live this good life and yet fail time and time again, succumbing to the temptations of the devil and the justifications of the world? Are you just exhausted with living, trying to do your best and yet nothing seems to get better? And as if this wasn't enough, here enters in the devil to tempt you, the world to stress you out, and the Old Adam to drag you into false belief, despair, and other great shame and vice. Sunday morning is great, you get forgiveness and the declaration that you are a free child of the eternal God, your Merciful Father, and a co-heir with your Savior, Jesus the Christ. However, Sunday's high seems to fade away faster and faster, and by the time Saturday night comes around, it's time to throw in the towel, call it quits, give into the devil, live with the world, and let the Old Adam have his way.

My friends, my fellow towel throwers, Sunday is for you. This Sunday we hear of the feeding of the 4,000 from Mark 8. Hear placing man in the Garden where everything was provided for him in Genesis 2. Hear of your life in Christ from Romans 6 which says, "For the wages of sin is death, but the free gift of God is eternal life in Christ Jesus our Lord." Come, receive the gifts of forgiveness, life, and salvation with fellow towel throwers and take comfort in the absolute assurance that Jesus has done all things for you. Take comfort in the reality that Jesus claims you, body and soul, and because He fed and took care of 4,000 people in both body and soul, He will do the same thing and even greater things for you. Bring all your towel throwing moments, your give ins, your weaknesses, your failures, your blow-ups, your doubts, all your transgressions of the Ten Commandments with you and lay them at the feet of Jesus, for He desires nothing but your sin in order that He may give you His full forgiveness and absolution. You who are tired, who are heavy laden, this is the place for you in which you receive the rest of Jesus, His blessed good news of your salvation, so that you may live this life in faith toward Him and in fervent love toward everyone in your life. Take heart, and be in Church and Bible Study on Sunday, not to add stress to your life, but in order that you may receive the peace which the world cannot give and will never understand. Come and be at peace in the wounds of Jesus, in His Word of Absolution to you, which acquits you of all of your sin and presents you to the Father blameless and righteous.

Peace be with you. May the devil be silenced, the world be hushed, and the Old Adam be drowned anew so that you hear only the voice of your Savior Jesus who says, "I forgive you. I love you. I claim you as My own forever," Amen.